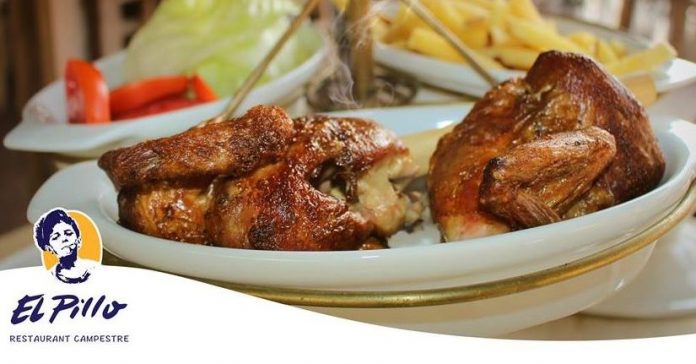 July took us on a most pleasant jaunt into the hills of Santa Clara towards Chaclacayo in search of a culinary adventure. We were naturally curious as to why Jimmy Schuler, one of the sons of Roger Schuler, founder of Las Trece Monedas, El Pueblo, and La Granja Azul, decided to follow in his father’s footsteps.

EL PILLO has as interesting a history and story as its predecessors, and we learned a lot from our gracious host during our wonderful lunch. We listened attentively to Jimmy over pisco sours, which were followed by an abundance of 28-day-old rotisserie chickens that melted in our mouths. Home made fries and a simple but fresh American lettuce and tomato salad with hot buns were accompanied by a select red wine.

Jimmy was born of a Swiss father who was a nephew of the famous Escher family that ran one of Lima’s most distinguished department stores. Roger Schuler arrived during the 40´s to Lima and was given a job in the big store as a salesman. He eventually married a Bolivian lady and Jimmy was born…. Bolivian. As it turned out, his parents were living in Cochabamba when his mother was pregnant, and when they wanted to cross the border to Peru, the immigration authorities wouldn’t let her take this valuable “Bolivian” child to be born a Peruvian citizen. Mother stayed behind with child and it wasn’t until he was 11 months old that she was granted permission to cross into Peru.

The Granja Azul restaurant nearby was a result of a whim of auntie Oeschle. She felt the Limeños should stop eating so much beef and start eating chicken. Shortly after acquiring a chicken farm, she slipped in the tub and died. Another nephew who knew more about the business was chosen to accompany Roger to run the business.

Back in those days, legend had it that by painting the walls of the coop an electric blue, it would rid them of the perennial flies. That’s how it became the Granja Azul! He eventually bought out half the business from his older cousin who had run into debt a lot higher than he had admitted to his cousin Roger. Perseverance and hard work produced 5,000 chickens, most of which died due to a plague. Reduced to a simple barnyard and their home, the Schulers decided to open their dining room with three tables to a curious public. When a Swiss merchant reserved a table for 20 people and paid in advance, they felt inspired to move ahead.

Eventually 36 bungalows were built on the hillside over the restaurant, and a tiny cable car served to transport guests to their quarters. The foreign mining company executives would take their altitude leave several times a year and enjoy the peaceful setting with the great food nearby.

Las Trece Monedas was also a creation of his father, Roger. It was Lima’s most distinguished restaurant set in the oldest colonial residence of Jirón Ancash in Lima next to the Congress. With downtown Lima deteriorating and the landlord claiming an exorbitant rent, Roger eventually decided to call it quits and dedicate more effort to the Granja.

With the success of the Granja and the bungalows, the idea of building a resort was born. Recruiting the help of son, Jimmy, they took advantage of Roger`s collection of 90 colonial doors and built a three quartered scale model of a typical Andean village. It became a popular hideaway for Peruvians and foreign residents who were deprived of international holidays due to the restriction on foreign currency during the Velasco government. One day, while Roger was in Europe, the fiscal police showed up and found some dollars and change the waiters had accumulated as tips from the foreign visitors that frequented the restaurant. Since possession of foreign currency was taboo during the Velasco regime, they were hit with a hefty fine. An order was put out for Roger´s arrest, so he decided to stay in Europe. What it was really all about was the military’s interest in gaining control of El Pueblo for it’s own recreation. They required a big loan to pay the fine and to finish off the hotel. In addition, pressure by the workers insisting on 300% salary increases only added to the frustration. Jimmy ended up as the owner and deep in debt. The Military Pension Fund ended up with the spoils, and Jimmy drowned himself in alcohol and cocaine.

When a doctor told him his pancreas wouldn’t hold out any longer and his life was in danger, he reacted and recovered. In the process, the Granja was sold off to a Picasso, a local power group, and his brother Johnny ended up with 1% of the shares.

EL PILLO was the inspiration that brought him back to life. Jimmy sold a valuable German painting originally belonging to the grandfather of his first wife to an Italian for $50,000. It was a portrait of a small, smirking street urchin referred to in Argentina as un PILLO. With 14,000 meters of land he held onto just above the El Pueblo property, he bought 30 tons of wood and 10 kilos of nails and built his new restaurant. He said he was sick of people criticizing the Granja´s decline in quality, and he tired of telling them that he no longer had anything to do with it.

Original publicity and enticements such as a 5% discount to clients if they get there and there is no sun attract the gamblers. On weekends, a PilloBus will transport you to and from Lima. Now in his 60s happily re-married and with a lovely talented daughter, the Schulers are on their way to new fame and fortune.