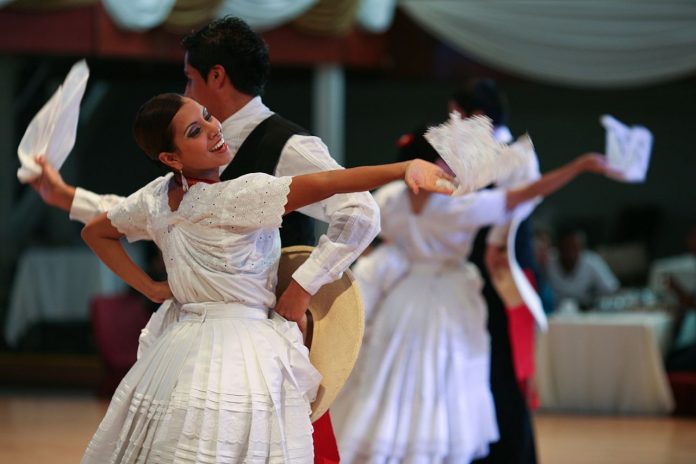 Colorful and exciting are rather bland adjectives when it comes to describing the annual Marinera competition held in Trujillo.

Despite the numerous folk dances that typify the many ethnic regions of Peru, especially in the sierra, there is no dance that has captivated more amateur participants and fans than the Marinera. Coastal cities from Piura in the north to Tacna in the south all boast their share of dancers. Even the Andean cities like Huancayo and Puno have developed their version of the dance and actively participate.

The chroniclers are still ploughing through the history books trying to determine the origin of this impressive dance, and there are many theories that have evolved. Some exaggerate and go back to the primitive natives observed by the Spanish conquerors that danced barefooted on the sandy plains along the coast while banging on rustic drums. Others claim the Spanish settlers brought their dances which were later influenced by the African slaves imported to work the haciendas along the coast of South America.

You can even see the influence of the European minuet, where partners face off, bow, formally flirt, but never kiss. The rocking action of the women while holding the extremes of her skirt represent the waves observed by the “marineros” or sailors while at sea.

Dances ranging from the Zarabanda, La Chacona, Jácara, Rastro, Tárraga, Fandango, Zamba, Zamacueca, la Cueca, all supposedly influenced the Marinera, as we know it today. La Cueca, or Chilena, a popular folk dance in Chile, was enjoyed in many communities along the Pacific, and when the Peruvians and Chileans fought each other in the War of the Pacific (1879-1884), the famous poet laureate, literate, reporter Abelardo Gamarra who was known as “El Tunante”(the rascal), took the Chilena and baptized it La Marinera in 1879 in honor of Peru’s greatest hero, Admiral Miguel Grau, who had bravely fought off the Chilean aggressors during five months aboard his ship, the Huascar, before being mortally wounded.

As most folk dances, the Marinera has evolved from a peasant dance performed on dirt floors in candlelight, to a well synchronized performance between the most attractive Peruvian females and handsome male partners called “Chalanes.” Music nowadays is provided by a big brass band, usually one of many Peruvian National Police ensembles that sit at one end of the coliseum without taking a break during hours of performance. Reminiscent of those strong, brass tones used to stimulate the bullfighters, and with the cadence of a waltz, couples start from a statuesque position awaiting the first blast of the brass to initiate their routine.

It is a flirtation dance. The male, decked out in a white shirt and black or white pants, with a finely woven striped poncho down to his knees, and a large brimmed straw hat, approaches his partner while twirling a white handkerchief in the air. His garb is similar to that worn traditionally on the coastal sugar and cotton farms by the supervisors who check the fields and workers while mounted on gracious Paso horses that glide rather than trot. They appear as country gentlemen in order to attract the female. The white handkerchief represents a flying dove of purity and grace. He wears black leather shoes with a raised heel to emphasize his fast footwork.

The female is cosmetically painted to highlight her natural features, and flowers and bands bedeck her hair that is tied back in a bun. Gold or gilded draping earrings done in the finest local filigree adorn her ears and match her necklace. Her outfit consists of two attractive underskirts, covered by a complete dress or a fancy blouse with a skirt and waste wrap. The amount of embroidery and lace in addition to yards and yards of satins produces a spectacular outfit that extends to the ankles and weighs about 12 Lbs. The average cost of a complete outfit is approximately $450 dollars.

At the outset, the male greets his “new” acquaintance, and tries to get her attention. She runs around in circles swirling her handkerchief and bears a constant smile and shining eyes. There is a break halfway through, the music stops briefly, and in seconds they are at it again. This time they appear to be made for each other, and are dedicated to consecrating the relationship. Despite the close encounters during the dance, faces come millimetres from each other but never touch nor kiss. This is forbidden!

Over 1,000 couples participated in the yearly competition. Categories are established in age groups starting from tiny tots under 5 and end with the seniors over 50 in the Masters category. It is most interesting to see the little ones dressed and made up in a replica of their older idols and they have an unbelievable sense of rhythm for such an early age. Naturally the most agile couples that give the best performance are amongst the Juvenile and Adult categories that are in the peak of physical agility.

The judges have a most challenging job. Starting on Tuesday and going through the following Sunday, waves of contestants fill the dance floor usually in heats of 4 couples at a time who are granted a limited space to perform before 5 individually seated judges. At the end of each evening, those who have qualified are announced, and move on to the semi-finals and eventually the finals on Sunday night. Saturday evening sees a break. About 6 or 7 amateur groups, old and young, compete in choreography, each presenting a special number but maintaining the flavour of the Marinera at the same time.

Before the competition of a new category in semi-finals and finals, champions from the previous year perform to the delight of the public. The final on Sunday evening consists of an all out blast with a full house of fans, as well as a group of dignitaries seated just off the dance floor that include mayors, congressmen, ambassadors, ministers, and national personalities like Mario Vargas Llosa, our acclaimed novelist.

There is never a dull moment, and the colourful surroundings are provided by at least 6 different dance schools that sit together with their uniformed polos waving flags and noisemakers. They are accompanied by anxious parents and relatives as well as dance teachers chewing fingernails and shedding tears as they watch their charges.

Earplugs are standard equipment for the seasoned fan, but most just bare the brunt of the volume. Beer companies, banks, newspapers, and other sponsors provide skin tight sleek models to attend the dignitaries during the events with beer and beverages, while the public seeks their own snacks and drinks.

The awards to the winners are chiefly prestige. The cash awards never exceed S/.5,000 Soles ($1,700 U.S.), and those are for the major prizes. The time and money spent during the year in classes and fancy dresses is practically impossible to recover. It is obvious the money is secondary.

Trujillo makes a most appropriate scene for the Marinera festival each year, which is usually held the last week in January. It is summer, the weather is very pleasant, the local people are very hospitable, and there are lots to see and do. Restaurants abound including places like Chelsea, a replica of an English pub establishment, Romano Criollo, El Gran Chimú, and dozens of great fish restaurants in nearby Huanchaco, a picturesque port only 20 minutes distance from Trujillo that is a surfer’s haven and a great place to sip pisco sours and watch the sunsets.

If you are into archaeology and cultural activities, there are ruins galore. The temples of the Sun and Moon, El Brujo, and of course, Chan Chan, the largest adobe city in the Americas, visited by the Chinese before the Incas ever appeared. (Chan Chan means long city wall in Mandarin). The central plaza is very historical and well groomed and a delight. There are far too many taxis, but then again, you can go about anywhere for just over a U.S. dollar, and to Huanchaco for about $8.00 dollars.

Trujillo is quite a drive by private vehicle, about 550 KM north of Lima. You can fly in a bit more than an hour, or you can take a bus with reclining seats and air conditioning for under $70 dollars round trip for 8 hours, watch TV, snack and relax.

The Women of Peru

The District of Comas