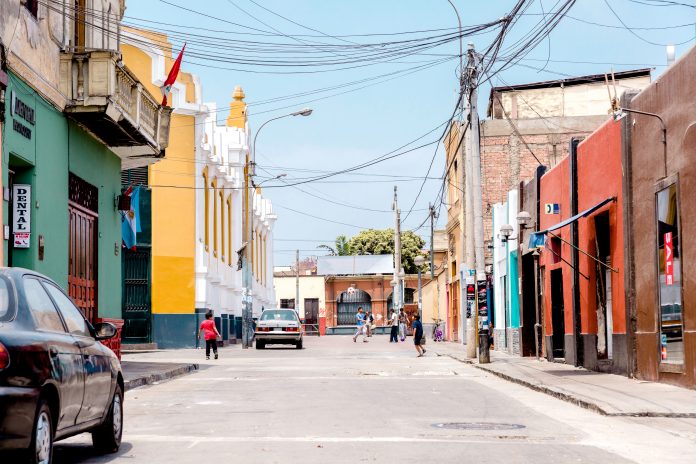 Continuing on with our voyage around the 43 districts of the Lima province, this month we’re making a stop in Barranco. Barranco sits just to the south of Miraflores on the coast, bordered to the east by Santiago de Surco and to the south by Chorrillos. Barranco covers an area of 3.33 km2 and had a population of 34,000, according to the 2017 census. It’s mostly populated by middle to upper-middle class families, and is described as having a bohemian and romantic atmosphere. That atmosphere is only enhanced by the districts popularity as home for many of Lima’s artists and writers. The beaches are also very popular among surfers, and have a world-wide reputation.

Barranco was initially a small fishing community. It was officially incorporated in 1860, and became a district of Lima in 1874. It wasn’t long before the district became quite popular as a seaside summer resort area for upper class Limeños and foreigners alike. They began building large casonas in the European style, and Barranco’s tradition of upper class bohemia was born.

Two major events mark the history of Barranco. During the War of the Pacific, Chilean troops advanced through the district, looting and burning much of it to the ground. Then, in 1940, an earthquake struck – once again, destroying much of the district.  Both times, residents rallied and rebuilt. These days, the district is well known for its entertainment and night life. There are many restaurants, bars, nightclubs and peñas criollas for the enjoyment of all. Some of the major points of interest:

Municipal Library (Biblioteca Municipal) – Located in the Municipal Park, the library is a building that stands out because of its beautiful ornamentation. It’s open to the public and contains nearly 3000 books, including books in Braille. The library was built towards the end of the 1800s, but the distinguishing tower wasn’t built until 1911.

Bajada de los Baños – The name “Barranco” comes from the Spanish for “ravine”, and that’s exactly what the Bajada de los Baños is – a ravine that cuts through the seaside cliffs. It was originally used as a walkway to the beach for fisherman coming from the eastern side of the district. Now, it features restaurants and bars along the path, with beautiful trees and bougainvilleas adding to the atmosphere. The Puente de los Suspiros, or Bridge of Sighs, which crosses the Bajada offers a wonderful view.

Plaza San Francisco – One of the most charming spots in the district, if not all of Lima. Surrounded by beautiful old house, the plaza is the home of the Iglesia San Francisco, built by the Italian architect Jose Tiravanti in the late 1800s. The church has been remodeled several times over the years, and now combines modern lines with the older style.

Shifts in Procedure Regarding the Peruvian Resident Workers Visa

The District of Cieneguilla