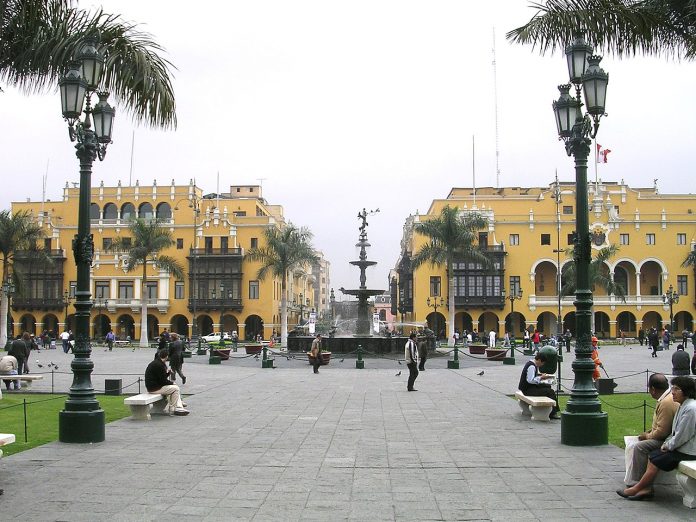 Often known in Spanish as the “Cercado de Lima” or “el Centro”, the Lima district was the first district created, and is the seat of the original government of the City of the Kings. It’s just one of the 43 districts that make up the Lima province, which is located in the department of the same name. It’s the capital of the province and is the seat of the Lima Metropolitan Municipality. As of the 2017 census, the district is home to 268,352 people.

The district, which covers nearly 22 km2, consists of several different zones including the uptown “Barrios Altos”, the residential “Santa Beatriz”, and the section best known to tourists, the Historical City Center. The city center was declared a UNESCO world heritage site in 1988 because of the large number of historic monuments and original Spanish architecture. One of the more prominent features of the city is the number of wooden balconies seen on many of the buildings.

The Plaza Mayor is usually the starting place for any tour of the district. Also known as the Plaza de Armas, this is the spot designated by Francisco Pizarro as the center of the city back in 1535. On the streets surrounding the plaza, you’ll find the Government Palace, the Cathedral of Lima, The Archbishop of Lima’s Palace, the Municipal Palace of Lima, and the Union Club of Lima (Club de la Union). Many of these buildings around the square are open to tourists. There are even horse drawn carriages which give rides around the square. The area is especially impressive when lit up at night, and the Mirabus tour company offers an evening tour in their open double decker buses just to enjoy that site.

As the streets lead away from the Plaza Mayor, you’ll find that there is plenty more to see here in the city:

The San Francisco Monastery is one of Lima District’s most famous churches, not only for it’s amazing Baroque and Moorish design and incredible artwork, but also for the catacombs beneath, which served as a cemetery for the city until the early 1800s.

The Barrio Chino – or Chinatown – is located on the 7th block of Jr. Ucayali. Not only a fun place to visit and shop for souvenirs, the Barrio Chino is one of the best places in the city to shop for cooking gear like pots, pans and so on.

The Museo de la Inquisicion (Inquisition Museum) is a very popular stop for many tourists, and is walking distance from the city center. The museum explains the influence that the Inquisition had on the early formation of the city through art and some particularly grotesque – but fascinating! – wax figures.

The Church and Convent of Santo Domingo is a revered place among Limenos as it the final resting place of Santa Rosa de Lima, the patron saint of the city. It’s also the burial place of San Martin de Porres and Saint John de Massias. The convent is quite beautiful, featuring two peaceful patios lined with 17th century Spanish tilework.

The Parque de la Muralla exhibits a section of the old wall that was built around the city of Lima as protection from pirates in the 17th century, and also houses a museum featuring archeological relics from the area.

Stocks, Bonds & Inca Kola: A Guide to Investing in Peru