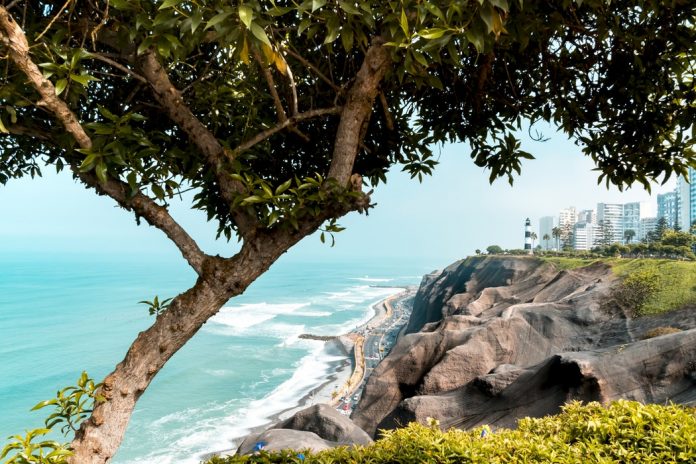 Last month, we talked about the Center of Lima, whose historic buildings and interesting past make it a center of interest for many people visiting Peru. This month, we’re focusing on Miraflores; also a very popular district of Peru, but in this case because of its modern and upscale style. Miraflores offers some of Lima’s finest hotels, shopping and dining as well as beautiful ocean views and green parks. In fact, the name translates to “look at flowers”, and the parks give you plenty of opportunity to do that.

At just under 10 Km2 (about 3.7 square miles), Miraflores is one Lima’s smaller districts. According to the 2017 census, the district is home to 99,337 inhabitants. The weather in Miraflores is generally mild, with warm summers and cool winters. Humidity is a problem for many people in the area, as the winter months see the district covered with a damp fog that rolls in off the Pacific.

The area has been inhabited for centuries, and in fact houses one of Lima’s most important pre-Inca archeological sites, the Huaca Pucllana. In the 16th century, the Spanish established the area as the town of San Miguel de Miraflores. But as the capitol city of Lima grew in population, it absorbed the smaller towns around it, and this too happened with Miraflores. It was officially designated as a district of Lima in 1857.

The district was the site of one of the most important battles of the War of the Pacific, which took place between the armies of Chile and Peru. The Battle of Miraflores occurred here, on January 15, 1881. While the Peruvian soldiers and civilians fought courageously to repel the Chilean invaders, some two to three thousand Peruvians died and in the end the district was pillaged and burned. The Chileans occupied the center of Lima two days later. The Parque Reducto No. 2 stands in memory of those lost in the war, and also houses a museum.

Since then, Miraflores has been rebuilt to become the modern, urban center that it is today. There are many expats who choose to live in Miraflores, for a variety of reasons. Many of the urbanizations in Miraflores are upscale and residential, and are generally safe for residents and tourists. Miraflores has a very central location, next to the finacial district of San Isidro and close to the more bohemian district of Barranco. It also has relatively easy access to the city center by way of the Via Express, where you can now take the Metropolitano Bus service. The area is full of restaurants, shopping and other entertainment. What’s more, many of Lima’s best schools are found in the area, making it convenient for families – both expat and local –  who don’t mind paying a bit more for housing.

A few of the activities available in Miraflores:

The District of Barranco