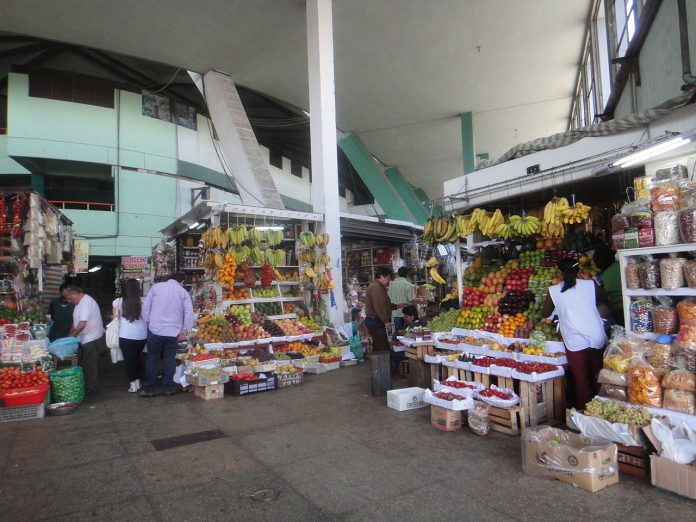 When we first started our journey around the 43 districts of Metropolitan Lima, we began with some of the best known and most residential areas in the center of the city: Miraflores, San Isidro, Surco and San Borja.  But we skipped over the little district that sits right in the middle of them all – Surquillo. The district is home to nearly 100,000 Surquillanos in an area that’s just barely 3.5 km2 (1.35 square miles) in size.  That high population density plus the fact that it is a poorer district have given rise to a higher crime rate than you’ll find in the mid-to-upper class districts that surround it.  But is Surquillo as bad as they say it is? Well… yes and no.

The district is in the shape of a bowtie, with “old Surquillo” on the northwest and “new Surquillo” to the southeast, with the intersection of Av. Angamos Este and Av. Tomas Marsano dividing them.  Old Surquillo is very commercial, with lots of business – originally lots of small business, but with more and more big business all the time. The areas of Surquillo that were once home to soft drink factories and textile mills are now filled with shops and commercial centers like Angamos Open Plaza, Metro Supermarket, Cassinelli, Plaza Hogar, and Maestro Home Center, among others. This side of the district is also home to two of Lima’s best known city markets: Mercado #1 (at the Ricardo Palma overpass on the Via Express) and Mercado #2 on Jiron Dante on the north side of Av. Angamos Este.

The neighborhoods in this part of the district are traditionally lower class and poor.  The part of Surquillo on Angamos Este directly to the west of Av. Rep. de Panama is sometimes called “Little Chicago” by the residents because of the high crime and gang activity. However, in the last couple of years there has been a campaign by the district to improve this area and its reputation. There have been a number of new businesses and banks, the streets are slowly but surely being cleaned up and repaired. There has also been improvement in street security; while it’s still not recommended that you go walking there after dark, the streets are much safer than they were just a few years ago.

The “new Surquillo” side of the district, located to the southeast of the Angamos/Marsano intersection, is a fairly well established middle class residential area.  Directly across Av. Tomas Marsano from the very upscale Miraflores district of Aurora, you’ll find the urbanization “Aurora Este”, less upscale but a very respectable residential area with plenty of bodegas, restaurants and panaderias within walking distance.  Close by, you’ll find the archeological site of the Huaca La Calera de la Merced.  The area offers reasonably priced housing for Peruvians and expats alike who want to live in a quiet residential area without paying the prices of the surrounding higher class districts. It’s central location, plus the inclusion of plenty of shopping within walking distance makes it an attractive option.