Whether you are planning to move to Peru, or you are already living here, the Expat Peru forum is a great place to meet people and to find information. Welcome to our community!

This is the place for ON or Off topic conversations. Almost anything goes - but be kind, and no trolling.
Forum rules
While the rules in this forum are more relaxed than in other parts of the Expat site, there are still a few things we’d like you to remember: No name calling, no insults – be civil to each other!
Post Reply
11 posts • Page 1 of 1

I've used Movistar for years, but internet is getting very, VERY slow. Claro equivalent is a LOT cheaper. They assure me they have CNN AND BBC, which are important to me.

Can anyone vouch for their internet service? They say its a new fiber optic affair. Thanks. ss

Internet is slow because more than likely you have DSL.. If you switch to movistar uno which uses a cable modem (same as Claro) it should be much quicker.
Top

I'd suggest giving Claro a go. A friend said they guarantee a minimum internet speed and there's a good choice of packages. As far as I can see, they're cheaper than Movistar as well. Unfortunately, I can't vouch personally for Claro, because they said that my building has a contract with Movistar and no one else can use their cable.

I've been with Movistar for a few years now and I've never had decent internet speeds, despite upgrading from 2mbps to 4mbsp and I'm now paying for 6mbps but rarely get more than 250kpbs. The other day I got a call from Movistar asking if I wanted to upgrade my service again. I said, what's the point? Do you want me pay for 10mbs and then you give me a speed of 300kbps?

One thing I'd also suggest is taking out your contract through the internet as there are some good discounts on their webpage at the moment. They'll tie you into a year's contract, but that's standard and they'll give you the first three months at a reduced rate. By the way, if at the end of the year, you think the service is no better than Movistar, you can always go back and take advantage of their internet deals, which also offer three months for reduced rate.

We have Claro 3play, the 6mbps package. This is the speedtest I just ran, just after 6pm, one of the busiest times of day. We've been very happy with Claro. 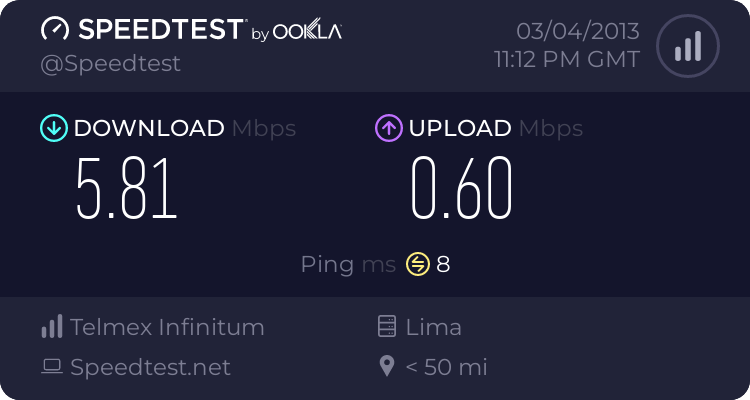 Oh, Kelly, what I'd give for speeds like that...
Top

Thanks to all. I was completely unaware of a cable option with movistar, and had no idea that's what the Claro people were trying to convince me of, they just kept saying it was not the same as Movistar.

I'll check and see if the MS cable option is available where I'm at. Thanks, again.
Top

Just used Speedtest (why didn't I use this before) and download is at 0.44!!! for a supposed service of 3mb. Sigh. At least this convinces me to at the least give a call to 104 to get a tech to examine this!!
Thanks. ss
Top

Here is the speedtest for movistar uno at my house: 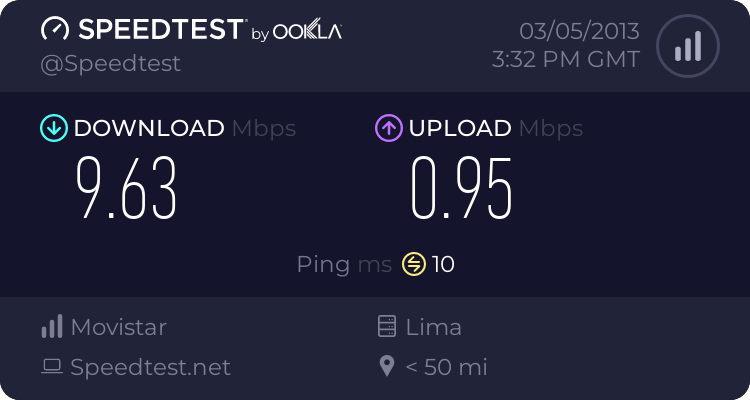 I just switched trios from Claro to Movistar some 5 weeks ago. Claro's internet was terrible and not constant (cancelled after a year). After all the problems I would recommend movistar to anyone.

Both are still crazily expensive the plans for the speeds I was used to..
Top

Maybe Movistar is improving, but I've had terrible experiences with them and Claro has been A+ service.
An Expat in Lima - My Life in Peru
Life and Travel of an Expat in Lima
Safe Taxi Lima
Top

Hi there everyone!
My apologies for posting on a semi-old thread. I am considering a move to Peru later in the year. I may have the option to work online with clients in the US, but would need a fast and stable internet connection to support this. To those of you who posted your speedtest results- may I ask if you are using upgraded or basic services? I need at least an upload speed of 1.0 Mbps and need good stability. I would have to use a landed DSL or fiber optic- no wireless. Just trying to get a realistic idea of what I would be paying for internet services and if this is a realistic option for me. Thanks for your help! Anna
Top
Post Reply
11 posts • Page 1 of 1