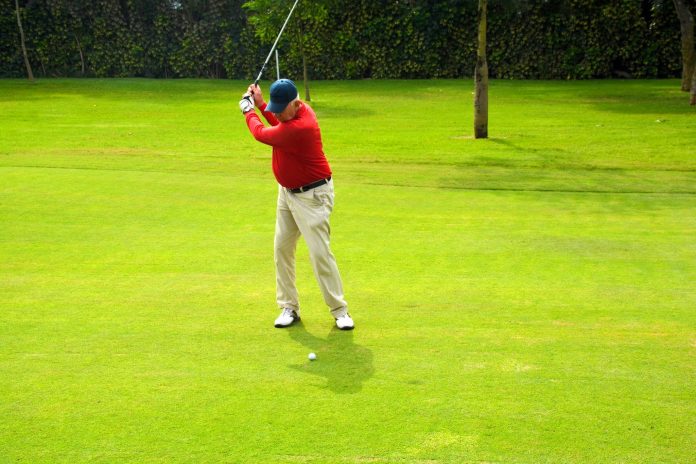 Talk about a unique place to play golf! Peru boasts the highest 18 hole golf course in the world. It is situated in La Oroya, 12,375 ft. a.s.l.  3,750m.) three hours east of Lima in the central Andes. Originally built by the Cerro de Pasco Corporation to entertain its foreign mining engineers and visitors back in the 1940´s, it continues as an active course and is open to the public. With the thin air at this altitude, even you would exceed Tiger Woods´ best drives, for sure.

In January of 2008, a new nine hole course was inaugurated in the heart of the Amazon outside of the port city of Iquitos. A snake pit had to be removed from the fairway on the 4th hole to make way for the new golfers. It is open to the public, and boasts young, attractive female caddies. Recently, an adventurous golfer ignored a warning sign at a shallow water hole as he tried to rescue his ball, and pirañas nibbled his ankles. Make sure you heed the signs!

Near the southern coast, the mega copper mine of Toquepala, originally a U.S. operation now run by a Mexican conglomerate, also brags about its unique 9 hole course. This one has no grass, since it lies in the barren hills near the copper ore deposits. They even play at night using luminous balls that bounce off the hills. A false step can mean more than “out of bounds”. They have an excellent hospital at the site.

Asia, Lima´s de lux summer resort area, where some homes exceed those back in Lima´s  Monterrico and San Isidro areas, there is an 18 hole course at Km. 96. This was built mainly for the summer residents in the area, and is considered the longest course in the country. There are no trees, but the fairways and rough are well maintained and many tournaments are held there throughout the year. It is also a private club.

Lima is rather sedate after all the aforementioned courses have been exhausted by the avid golfer looking for something he can’t get back in Palm Springs or Pebble Beach. There are four 18 hole courses in the area including Lima Golf Club, Los Inkas Golf, La Planicie Country Club, and Club Villa on the Pacific ocean. Lima Golf is the oldest club in Lima and was founded in the 1920´s. Its first president was manager of the central railway. Rather impatient with the tardiness of a contractor hired to build the first clubhouse, he ordered a copy of blueprints of one of his railway stations, and a faithful replica was soon erected which served as Lima Golf´s first clubhouse.

Los Inkas Golf Club is just outside the city in the foothills of the Andes and was built just after WWII. It features pre-Inca ruins on the course, and after rare squirrels broke out of the cages belonging to the deceased president of the World Wildlife Fund, Alfredo Benavides, who resided at the foot of the course, the area is now populated with these creatures, many of them albinos. Membership fees at Lima and Los Inkas are in the range of $150,000  and $80,000 respectfully, and dues run about $180 a month. Considering the quality and services available, this is a pittance compared to U.S. private clubs. Caddies are commonplace and most are excellent players. Green fees for guests are a bargain $100 dollars per round. Caddies receive an average of $20 dollars for their services.

There are also a few 9 hole courses up the central highway in the sun belt about 45 minutes east of Lima. Granja Azul was named after the famous roast chicken country restaurant and built for the pleasure of the mining engineers and their families who worked in La Oroya high in the Andes. These expats were granted altitude leave a few times a year and a nice little course was developed by a Scotsman. It was originally 18 holes, but during the first Alan Garcia government (1985-1990), part of the course was invaded by nearby squatters and the course reduced to 9 holes. A recent lawsuit against a cooperative formed by the squatters yielded a settlement of $800,000 dollars which has been invested in improvements in the facilities. Part of this was stolen by a former club president, and he died mysteriously shortly after.

Country Club Los Andes is another 9 hole course in the hills just before Chaclacayo. It is well groomed and a real challenge, and almost always has sunshine and a pleasant, quiet atmosphere. Membership of both these clubs is very reduced, and the membership fees are very attractive. You can usually play as a “visitor” on your own for about $25 dollars a round.

In 2008, the first public course was inaugurated. San Bartolo, a beach resort area about 35 Kms. South of Lima on the Pan American Highway, opened an old 9 hole private course to the public, including kids from nearby marginal areas that could never think of taking up the sport in Lima´s exclusive facilities. The game is played on a desert floor, and a small patch of artificial grass is provided to place under your ball for accuracy and comfort. Poor boys in the area have now been taught to caddie, and several are competing internationally sponsored by the Peruvian Golf Association!

In the provinces, both Arequipa and Trujillo have private golf and tennis clubs. Arequipa just celebrated its 100th anniversary. The oldest club in Peru! Los Inkas enjoys a reciprocal agreement with Trujillo and their members play without cost when visiting. Many of the clubs have these agreements.

Between Lima Golf, Los Inkas, and the other clubs, there are no more than 600 active golfers. If you are just a visitor, you must get a member to invite you, which is always possible in a “small town”.

Up until 15 to 20 years ago, women usually played amongst themselves and were not allowed to play Saturday mornings, the most popular period for the men. Children were not to be seen nor heard. Nowadays, there is no gender nor age distinction and training programs for children starting at a very early five years of age are producing some amazing talents that are competing internationally. In the Americas, Argentina takes the lead in golf development and participation, followed by Colombia, Chile, Venezuela, and down on down the line. Angel Cabrera, Argentine pro who started as a young caddie,  won the prized Green Jacket and trophy at the famous Masters Tournament in Augusta, Georgia. Cabrera participated twice in Los Inkas in the Peru Open tournament before he could even pronounce “che”. He was the first Latino to win the Masters. (Tiger came in 6th!).

Peru is a golfer’s paradise. If you are fortunate enough to be a member or a guest, you very seldom have to request a tee time and can usually go off immediately. It never rains in Lima, and the weather is always perfect for golf with no wind. Classes are readily available with professional instructors and open to the public behind the tennis courts at the Jockey Club, adjacent to the racetrack in Monterrico. They normally charge $17 dollars the half hour.

You can enjoy golf every day of the year, as the coast of Peru has a benign climate that only varies between 17ºC and 27ºC with no rain nor offensive winds. As long as Tiger, Arnold Palmer, and Jack Nicklaus don’t find out our secret, we should be able to enjoy our golfer’s paradise for some time.

Author Jim Plunkett has lived in Lima since 1964. He has worked extensively in local and international commerce.

Legalization of International Documents with the Hague Apostille

What to visit in Lima