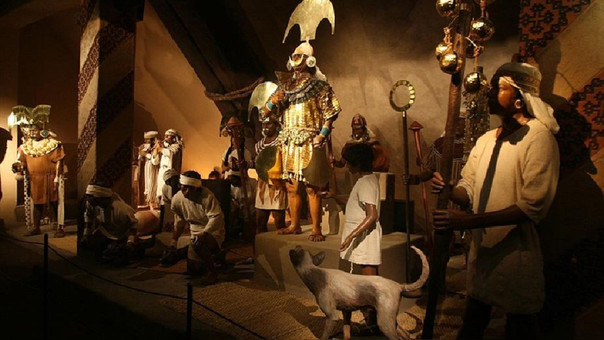 I cringe every time someone says, “You’ve been here that long?” Having been here over 50 years is a long time, but when I discover how long some of the other foreign inhabitants have been here, I feel better. When I first arrived, all they were talking about were the Incas and the Spanish conquerors. Nowadays they are talking about Moches and Cupisniques, Paracas, and Chimu peoples as though they had been here for years….. and they have.

It is not the proper moment to go into detail on some of the latest discoveries around Peru, but I wanted to share a few items that have appeared in the local tabloids that will give you an idea of what these modern archaeologists are finding in their digs and explorations.

Lambayeque, about 600 Kms. north of Lima on the coast, is loaded with fascinating discoveries. The biggest one was Our Lord of Sipan, (approx. 400 D.C.) Early Horizon period. The “huaqueros” or grave diggers have been poking around the ruins in the rich valleys of the coast for years looking for pre-Colombian artifacts, and tons of precious treasures have been found and sold to private collectors and are sitting in private collections as well as museums around the world.

One late evening in February of 1987, Dr. Walter Alva, archaeologist and curator of the fabulous Tumbes of Sipan museum in Lambayeque received a phone call from the local police station saying he should come immediately, as they had confiscated artifacts that would interest him. When Alva saw the fabulous gold head with eyes of lapis lazuli the huaquero had found in a nearby ruin, he was speechless. This was the start of a dig called Sipan to which National Geographic has dedicated issue after issue.

After a careful excavation at the adobe Sipan “huaca” or temple where they found the burial of a very important lord and his personal courtiers, they discovered even older remains of a predecessor of Sipan called Sican, with another lord and members of his court buried with honors.

Since then, the entire area of the valleys of Lambayeque and La Libertad have become a treasure trove for archaeologists…..and tourists. The museum at Lambayeque outside of Chiclayo is a jewel and appropriate tribute to these rich Peruvian cultures that shared the coast long before the Incas.

Shortly afterwards, Dr. Alva and his crew uncovered an even greater find called El Ventarrón, not far from Sipan and Sican. Ventarron is a temple made of a quality adobe mix and built over a stone foundation which has carbon tested at some 4,000 years of antiquity. The interesting thing about Ventarrón is the artwork. There are animals like the polychromatic deer behind a net used to trap it, and other tropical animals. This is quite different from those figures found later during the Formative Period (2,500-3000 yrs. ago) in nearby Pomalca which feature felines, serpents, and birds, signs of a different tradition from that of their ancestors, and repeated 2,000 years later in Sipan. Unfortunately, a few months ago, Ventarrón suffered from next door farm fire which claimed some superficial destruction at the site, but luckily not too costly.

South of Lambayeque and only 45 Kms. north of the colonial city of Trujillo, home to the Marinera, are a host of other discoveries that have rocked the scientific world. The complex called “El Brujo” (the witch) consists of a series of adobe mounds which were originally huacas or holy temples constructed over centuries. The fascinating thing about this site is that it is concentrated within 100 hectares, or one square kilometre. El Brujo overlooks the rich Chicama valley used for sugar cane production since the last century. It is obvious that just about anything can grow on this fertile soil. It also has a spectacular view of the Pacific Ocean and a benign climate all year round. What a better place to worship and pay tribute to their gods.

It must hold some special mystic powers, since distinct cultures have worshiped here for over 5,000 years continuously. From nomadic tribes, then cultures including Cupisnique, Salinar, Gallinazo, right up to the Moches, Lambayeques, and just before I got here, the Incas. As though this weren´t enough, the Spaniards arrived, conquered the Incas, and then they even saw fit to build a parish church on the same property, probably to show these pagans what the true church was that was born in another continent.

Within this reduced area, you will find La Huaca Prieta, La Huaca Rajada, and la Huaca de Cao. In many instances, they have discovered that new leaders built new temples on top of earlier ones, always respecting their forefathers buried beneath with all their sacrificed servants, gold, and artifacts that they were to take to the heavens after death.

Archaeologists have been excavating constantly for the last 17 years and the area is now open to you, the tourist. To date, 25,000 tourists visit the site per year, compared to 120,000 that visit the mud city of Chan Chan and the temples of the Sun and Moon outside Trujillo. A museum was inaugurated in 2009 displaying the well conserved remains of Our Lady of Cao, the first woman ruler who was considered like a queen and witch at the same time. It is a must for the visitors to Trujillo and Chiclayo. The Cao temple has some outstanding adobe friezes on the walls of Moche warriors boasting their manhood, as well as their trophy heads won in battle.

What interested me was the Huaca Prieta. It is still to be excavated, but was explored in 1946 by Junius Bird, president of the New York Explorers Club, who pecked through a small part of the huaca and determined it was a sort of pre-Colombian garbage dump. One thing he came up which interested me was a carved vegetable gourd, dated at 2,500 B.C., since, as an exporter of local crafts for many years, included many carved gourds in my exports to some of the finest shops in the world. The owner of a cosmetic firm in New Jersey spotted them for sale on the streets of Lima, found me through a friend having a drink at the Sheraton, and I ended up shipping over 30,000 gourds to him in two years.

Another major discovery was made South of Lima near the farm city of Ica in a town called Ocucaje, famous for its grapes, wines, and piscos. The area is a wealth of not only pre-Colombian treasures, but pre-historic creatures as well. In the surrounding desert areas, they have found ancient fossils and remains of whales that make our current species look like sardines. Believe me!

This area was the home of the Paracas culture, better known as Paracas Cavernas, (600-800 B.C.) since these people liked cave dwelling. They also liked to weave, and despite the primitive spinning tools available 2,800 yrs. ago at the local knit shops, their weavers spun the finest hair fibers from llamas, alpacas, and vicuñas. Textile experts testify that the Paracas weavings contain more knots per sq. inch than any other weavings in history.

The principle god for these people and subsequent cultures was the condor, that majestic bird with the record wingspan that still makes daily excursions from the peaks of the Andes to the Pacific looking for something to eat. They were featured in many of the weavings and on special pottery handcrafted only for the highest dignitaries of the time. The condor remained the supreme god through the Wari culture (400 D.C.), when the Incas decided to replace him with the Sun god. Luckily Simon & Garfunkle recognized the condor´s value and sang his virtues in El Condor Pasa, reaching a far greater audience than the pre-Colombians had ever anticipated.

After 30 years of searching and roaming the area, scientists discovered, carved into one of the highest hills around, a condor measuring 137m long by 87m. wide. They have worn out many boots searching for these hieroglyphics over the years, and it wasn`t until an overhead flight in a small plane furnished by Aero Condor that they detected this work of art hidden to the naked eye. It has quickly been registered as a national treasury and out of bounds for mining companies and dune buggies. This unique site only adds to the well-known Nazca lines and hill figures, and all the more reason to consider Peru as a tourist destination for foreigners, as well as well as a wonderland of historical attractions for its residents!

Marriage Law and Divorce in Peru