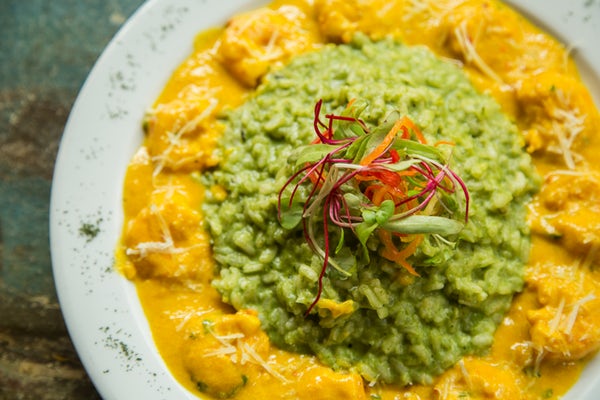 Peru’s unique geography, mix of races and cultures, and fusion of ancient and modern gastronomies give the country one of the world’s most diverse cuisines. It has been noted in the book Ampay! Peru that Peru has 491 traditional dishes – which puts it on par with the best Chinese, Italian and Indian cuisines. Thanks to the diversity of Peru’s crops, there is a wide variety of ingredients available for cooking. Many classic Peruvian dishes use aji – the Peruvian word for a variety of peppers – to add flavor, spice and color. The potato is another staple of Peruvian cooking. It is estimated that Peru has over two-thousand types of potato! Meats, seafood and other common ingredients such as tomatoes, corn, sweet potatoes and a wide variety of fruit make up the Peruvian diet.

Peru’s three regions (costa, sierra and selva) each have traditional dishes that have developed based on ingredients native to each area. On the Pacific coast, we find seafood in abundance. Ceviche, chupe de camarones (shrimp soup), and jaleas (fried fish and seafood) are all popular dishes in this region. The diet on the coast has also been influenced by the immigrants who have passed through or made their home there. Chinese food, called chifa locally, is ubiquitous – Limeños often joke about finding a chifa restaurant on every corner. Because of the influx of Peruvian camposinos to more urban areas, coastal cities have also adopted the dishes of other cultures and regions of the country. Some of the more popular of these criollo dishes are aji de gallina (chicken in a spicy sauce), lomo saltado (sautéed beef with tomato and onion) and arroz con pollo (rice with chicken). Street fare, such as anticuchos (seasoned grilled beef heart), tamales and papas rellenos (a ball of mashed potato, stuffed with meat and spices) are also favorites.

In the Andes, we find simple fare, with meals traditionally comprised of corn and potatoes or other tubers. Since the introduction of rice, bread and pastas, these too have become mainstays of the Andean diet. Typically, the meat eaten is goat, sheep or alpaca – although cuy (guinea pig) is also popular. A favorite Andean meal is panchamanca, a type of pit barbecue, where meat and vegetables are bundled in plantain leaves and put in a covered hole with heated stones to cook.

In the Peruvian jungle, again we find most food made with ingredients indigenous to the region. The best known jungle dish is juane – rice, chicken, hardboiled eggs and spices wrapped up in a large leaf and left to boil for an hour or so. Paiche (a large freshwater trout) and tacacho con tocino (a mash of roasted plantain served with bacon) are other popular foods from the selva.

For those looking for more information on Peruvian foods, the following books and video are available:

The Art of Peruvian Cuisine – by Tony Custer
The Food and Cooking of Peru – by Flor Arcava de Deloit
The Exotic Kitchens of Peru – Copeland Marks
Video: Anthony Bourdain: No Reservations, Season 1, Episode 13

What to visit in Lima

Doing Business in Lima Peru – A “How To” Guide