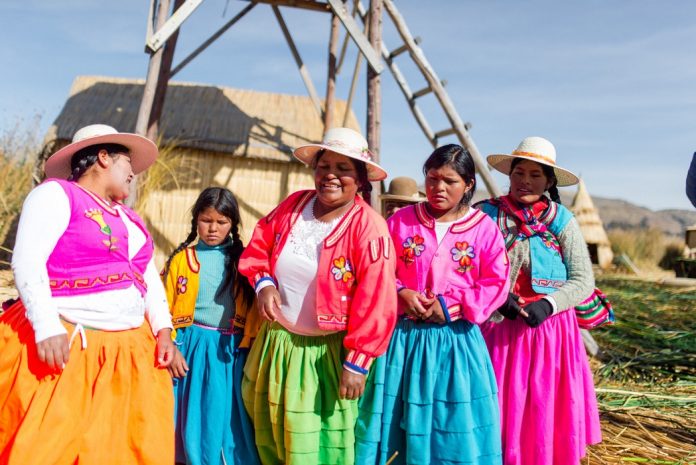 Someone asked me to describe Peruvian women recently, and I had to hesitate and gather my thoughts carefully before answering, as they come in all shapes and sizes, colours, and moods, and can be most attractive when observed under the right light.

Do we have any hockey moms? Definitely not. As a matter of fact, I have never even seen a soccer mom or a surfer´s mom. Undoubtedly they exist, since most males with a foot and a leg play soccer, and with the popularity and fame of the surfers, there must be a lot of moms around encouraging their talented offspring.

Women are slightly outnumbered. There are 1.01 men for every woman which sounds like a pretty democratic situation, doesn`t it? Unfortunately it doesn`t mean much for the girls.

To describe Peru´s women, you have to consider social levels, geographic locations, and traditions.

From colonial times, the Spaniards influenced the role of women in society, relegating the financial and administrative responsibilities to men and leaving the motherly chores to women. Those dark, Spanish eyes which were inherited from the Moors were generally hidden behind a black, white, or beige laced mantilla which covered a lady`s face with the exception of one eye that carefully observed passers by as they peered from a latticed wooden balcony in Lima, Arequipa, or Trujillo.

At the same time, slaves were imported from Africa and quite a large Afroamerican population developed, especially along the coast where the majority of farming took place. There were also vestiges of the Inca blood within the population, and over the last 400 years, there has been an evolution of racial blending which has produced a majority of individuals called “mestizos” or citizens of mixed blood that have the most interesting DNA.

Up until the more recent times with decline in the private sugar and cotton estates which were confiscated and made into cooperatives by the Velasco regime in the 1970´s, working women on the farms were subject to abuse by the “patrón” or owner who had the right and privilege to bed the bride of a worker on the wedding night as a gesture of respect.

General Velasco and his dictatorial regime (1968-1975) changed Peru drastically. Highly efficient farms were made into cooperatives. Production and efficiency declined drastically, and immigration towards Lima, the center of all production and hope for survival, suffered a sudden influx from the provinces.

As a result, any vacant hillside property outside of the capital became squatter’s territory and the Pueblos Jovenes (Young Towns) were born. Poor women were transformed from rural farmhands, to urban charwomen and mothers fighting for survival in a new and hostile environment. Lima is now a city of 9+ million!

Today`s poor woman living in the outskirts of the city must maintain herself as well as her children, attend her mate, if he is still with her, and try to find work to cover basic expenses. Most rely on subsidized food programs in neighbourhoods or in local schools. Many seek jobs as domestic help in the wealthier neighborhoods, while others try their luck as street vendors, working long, tiring hours away from home.

These are the women of the city. The majority of them come from the Andes region of the sierra where today, as in the past, a woman´s role has remained fairly stable. Most live on small plots of farmland, and usually fill the role of matriarchs. While the men and boys work the fields, the women attend the marketplace, operate small shops, and manage family affairs.

Beyond the Andes and far away from the Pacific lies the Amazon jungle. There the life of women has hardly changed. Husbands and children get full attention, and the women take charge of household chores including weaving and crafts, while the men comb the nearby area for food.

That´s one side of Peruvian femininity. This is a picture of the majority, since near 25% of Peruvians live in poverty, and over % in dire poverty. Luckily there is a sign of progress taking place since the Fujimori regime in the 90´s, and as a result of the economic progress during more recent years.

On the other side of the city lives another woman altogether. The so called middle class you might find in Europe, the U.S., or Canada, is still in the making and will take time. Only a few kilometres away from extreme poverty we discover a whole, new world. Districts are neatly manicured by squads of uniformed gardeners. Women street sweepers risk their lives in the busy freeway connecting downtown Lima with other districts further south called San Isidro and Miraflores. To the east, San Borja, Monterrico, and La Molina, the new residential area.

Here we find an entirely different Peruvian woman. She is in the upper 5% of society, often born of ancestors with foreign blood, usually European, well dressed and educated and under the protection of loving parents that provide everything not found on the other side of town.

Up until the late 50´s, Lima was a city of only 1.5 million inhabitants. Families were numerous and affordable. Homes in the districts bordering the Pacific side of the city were usually large and roomy, and servants were readily available. Girls were only educated in private schools without boys, and unique uniforms provided a touch of prestige and distinction, marking a sharp difference from public school students.

In addition to the ABC´s taught by either imported Catholic religious orders from Europe and the States, there were non-religious private schools of different nationalities including American, British, French, Italian, Swiss, German, etc. Girls were primed in reading, writing, and arithmetic, as well as household chores in preparation for a long career in motherhood. College or university was for the boys and few girls were ever sent abroad to study.

The military dictatorship of Gen. Velasco during the 70´s provoked many wealthier families to reduce the size of families and sell off the old spacious family residences. It was a good excuse to send daughters to foreign lands for advanced education.

Private schools started to integrate males and females, following the state public school system. Students across the country were obliged to wear the same grey uniform with white shirts and blouses, and although quite unpopular at first amongst upper classes, it finally served to help integrate diverse social levels and grant women, especially, a more equal role in society.

As Peru returned to democracy in 1980, a surge in the development of new universities occurred, and those young women wishing to remain close to the family or not being able to afford the high cost of an overseas education started filling the halls of La Catolica, University of Lima, Ricardo Palma, San Martin, and others.

Following the dark and dangerous period of the 80´s which combined the horrible onslaught of the Shining Path and the MRTA terrorist groups, and midst a faltering economy brought on by the APRA government that produced a world record inflation of 2.2 million percent in only 5 years, the population finally saw a light of hope under Alberto Fujimori.

Upon the defeat of these terrorist groups and the correction of rampant inflation, foreign as well as local investment began to blossom at an accelerated pace and has continued until today while Peru enjoys an enviable record of progress in the Americas.

As to women’s rights, the ladies have to recognize Alan Garcia´s party for spearheading suffrage. Back in the early 50´s, APRA supported the right to vote for women who worked and were “educated”. Finally, in 1956, the Constitutional Congress of Peru granted adult females the right to vote, regardless of their educational or social level.

Contemporary Peru now boasts many integrated schools of males and females, universities where both sexes compete on the same level, and a workplace where some of Peru´s top international executives are women. The Armed Forces now share their ranks with highly qualified females. There is still a way to go. Machismo is still dominant, especially amongst the majority, the poor, where taxi and bus drivers are disrespectful and defiant towards women police. Companies, both Peruvian and international, have improved the salary level of women versus men, but the boys still take home bigger pay checks. Women are now running for presidential office and filling important roles as ministers of state.

Attractive? They are all beautiful, from the wonderful mother carrying buckets of water up long flights of steps to her humble dwelling, to the young, female executive giving a sales conference, to the little ones getting on the school bus heading for another day beside the boys. Vive la femme peruana!

Sporting Organizations for Expats in Peru