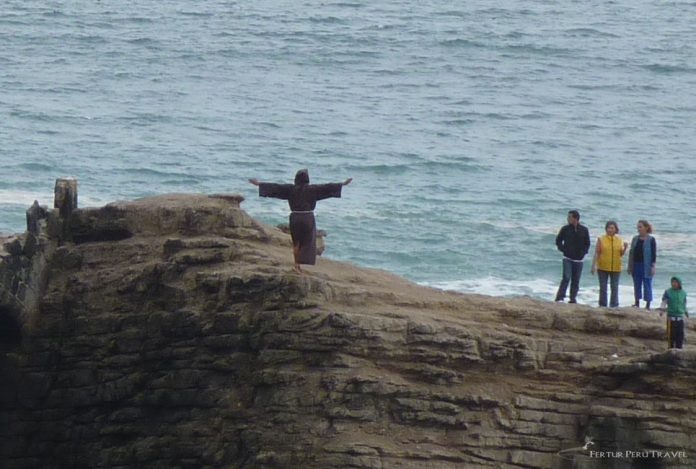 Six days a week, cars line up along the cliff-hugging highway in Lima’s Chorrillos district to watch men dressed in the simple brown robes, humble cintures and plain sandles of a Franciscan Friar hurl themselves from a dizzying height into the torrid waters of the Pacific ocean, over and over again.

They do it for tips. Have been for decades. This is the Salto del Fraile, the reenactment of the legendary lovelorn leap of Friar Francisco, who jumped to a watery death rather than be separated from the love of his life, the beautiful Clara.

Their love wasn’t forbidden because of any broken vow of celibacy, though. This is not the run-of-the-mill, cliché story of a wayward priest.

The full tale is much more complicated. It was recounted in a 19th century short story, El Salto del Fraile, written a few years after the War of the Pacific (1879 to 1884) by Peruvian author and poet Ricardo Rossel.

Here is a loose and partial translation:

Francisco and Clara grew up together in 18th century Lima, more than best friends — They were soulmates. In the strict racial caste hierarchy of the Viceroyal City of Kings, her father was a blue-blooded Spanish Marqués; Francisco’s mother was a beautiful woman of mixed African and Mestizo descent, and Clara’s wet nurse.

Now, this was the early 1760s and the Marqués de Sarria y Molina tried to be, as his father was before him, distinguished by the Enlightenment of his race and his coat of arms. Although he was the head of one of the noble families of the City of Kings, he too was a widower, ye 12 years bereaved, who doted great affection on his only daughter, Clara.

The Marqués also showed great affection for Francisco, whom he called by the nickname Panchito, and whose uncanny resemblance to one of Clara’s uncles gave cause for gossips to whisper that perhaps the noble Spaniard had not been indifferent to the enticing attractions of Panchito’s mother. Despite the social and legal prohibitions, such situations were common enough in Lima of the late 1700s that no serious scandal befell the household.

Panchito was three years older than Clara. They spent their childhoods inseparable, tutored together for a few hours each day, although they learned little, and the rest of their time was spent playing tag and hide-and-seek. The years went by and soon the girl was no longer a child and the boy was eighteen. They were, however, still so innocent that the Marqués saw no reason to intervene in their childish games. The tag and hide-and-seek continued, mostly unobserved, in the huge mansion.

When their innocent love for each other inevitably grew and was consummated, they of course were discovered in the act. Clara suffered seizures and fits in reaction to her father’s uncontrollable rage, while Panchito fled in terror to the farthest corner of the tremendous house to hide.

When he finally calmed down, Clara’s uncle, and confessor, Father Mendoza, was summoned and it was decided that Panchito would be locked away in the Recoleta Monestary and forced into the Franciscan Order. It was also agreed that Clara should be whisked away to Spain.

Three days later, Panchito could be seen garbed in the cloak and habit of Santo Domingo, at Father Mendoza’s side for Mass. The Marqués, meanwhile, made the secret preparations to leave for Spain on the frigate Covadonga, which was due to set sail within a month.

The novitiate friar, heartbroken, obeyed the force of his circumstances — that is until his mother discovered the Marqués’ secret travel plans for Clara and got word to Panchito.

From that day forward, his mother could be seen attending every eight-o’clock mass. Any attentive observer would also have witnessed Panchito reaching beneath the confessional chamber, where he would leave his letter for Clara, and retrieve her’s to him.

The last letter exchanged was from Panchito.

“This will be the last of mine you will receive, Clara my love. Tomorrow I leave for Chorrillos with Father Mendoza,” he wrote. “I must obey … I have no will of my own … I am a slave. My mother tells me that on the 17th the ship will take you away from me forever. Listen then to this plea that I make to you. When you sail in front of Chorrillos, look for me with the telescope atop the cliff of Morro Solar, the headland that juts into the sea. There I will be to bid you my final farewell … Goodbye, soul of my soul!”

Eight days later, the Marqués and his daughter journeyed to the port of Callao and at two o’clock embarked on the frigate. Clara was serene, but her face was pale, her beautiful eyes sunken and dull and her breathing interrupted by frequent sighs, which she tried in vain to suppress.

The frigate followed the parallel course to the Island of San Lorenzo and it was five thirty by the time they reached Chorrillos. With the naked eye, the seaside village was hardly visible, wrapped in the haze of the late afternoon mist.

Clara stood on the ship’s deck, sailing away, spying with her glass the top the shorn clifftop. Just then, the low setting sun burst its rays behind her. As arranged, he was there, in her sights, waiving.

The moment was overpowering. They could see themselves ripped and barreling apart. Tears rolled down her face. Overwhelmed and hopeless, he leapt into the void and fell to his death.

Clara let out a shrill cry, the telescope fell from her hands, and she exclaimed in supreme anguish:

“Goodbye, father, I go to meet my Francisco!” and she too threw herself overboard and was swallowed by the dark waters.

They say the forbidden love between the friar and Clara was so strong that their spirits still whisper in the crashing waves and fluttering wings of the seagulls below the Chorrillos cliffs. 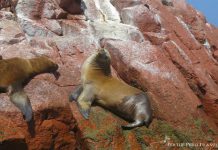