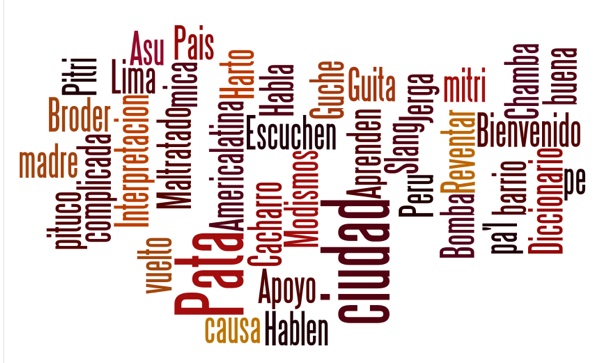 While Spanish is the main language used in Peru (along with Quechua, Aymara and other indigenous languages), Peruvians use so much slang and colloquial expressions  that it can sometimes be difficult to follow. For example, Peruvians like to have fun with language, and use a lot of ‘sound alike’ phrases, like the Cockney rhyming slang – for example ‘ahí nos vidrios’ (there are the glasses) is sometimes used instead of ‘ahí nos vemos’ (see you later). Another favorite, and a tough one to figure out until you’re used to it, is the habit of ‘rearranging’ words, or turning them around backwards.  For example, instead of chofer (driver), drivers are called ‘fercho’.

(Peruvians also love to use the diminuitive form – in other words, they like to add the ‘ito’ or ‘ita’ at the end of words.  So instead of gata, they use gatita. Instead of casa, we go home to the casita. That’s not slang, but this habit takes a while to get used to.)

So, to help you out when you’re out on the street, here’s a list of some common Peruvian slang and colloquial expressions.

We’d like to hear from you. What is the Peruvian slang or expression that you have found the most useful, clever, or surprising? Tell us about it in our forum topic: Peruvian Slang Expressions. (No swearing please)

The District of La Molina

Transferring Children to a Peruvian School