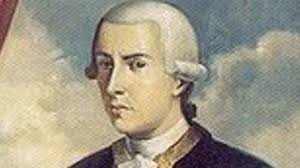 It is not well known by most Peruvians, Americans or Canadians, but it was a mariner born in colonial Peru (a viceroyalty of Spain at the time) who was responsible for an important part of the early mapping and exploration of the west coast of Washington State, the Province of British Columbia and the State of Alaska.  And not only that, this same mariner-turned-diplomat was Spain’s key negotiator in crucial meetings held with Britain’s Captain George Vancouver – talks which eventually delimited British and Spanish rights and borders in the Pacific North West.

Please meet Juan Francisco de la Bodega y Quadra y Mollinedo, born in Lima, Peru in 1744 to a Spanish father and a mother of Spanish ancestry. Young Juan Francisco grew up only blocks away from the Plaza Mayor (Central Square) in downtown Lima, but he left Viceroyalty of Peru at the age of 19 to join the Spanish Navy and study at the Naval Academy in Cádiz. Remember, this was still half a century before Peruvian independence, so if you were born an aristocrat in Peru and you wanted to be a mariner, you sailed for the Spanish Armada.

Bodega y Quadra would eventually make three voyages to the Pacific Northwest under the Spanish flag. His first and most dangerous expedition was in in 1775, when he sailed under the command of Lieutenant Bruno de Heceta. This expedition first consisted of three ships: the San Carlos, which was soon to run aground, the Santiago, commanded by Heceta himself, and the schooner Sonora, which quickly fell under Bodega y Quadra’s command when his immediate superior suffered a mental breakdown.

The goal of the mission was to explore and map the northwest coast of the Americas, and to go ashore whenever possible to conduct officious ceremonies that would reinforce Spain´s territorial claim to the area. Besides future plans of resource extraction and possible colonization, there was strong competition between the superpowers of the day to discover and control the fabled Northwest passage, which they hoped would connect the Pacific and Atlantic oceans. The British had already made landfall in what is now British Columbia, Canada, and the Russians were also rumored to have set up encampments in present day Alaska, so the race to establish a settlements was on.

The trip was punishing. The Sonora was a bad sailor, weather was poor and progress was slow. It was only after four grueling months that, on 13 July, 1775, the ships finally reached the vicinity of Point Grenville and Destruction Island (in what is known today as the U.S. state of Washington) and here tragedy struck:  There was a violent encounter with the indigenous Quinault people, and six crew members of the Sonora were killed when they made shore.

Shaken by this event, and with most of his crew members suffering from illness, the leader of the mission, Lieutenant Bruno de Heceta, decided to cancel the expedition and ordered both ships back to San Blas. However, Bodega y Quadra had other plans. Under his order, the Sonora slipped away from the Santiago when the two ships were separated during bad weather, and the Sonora  ventured north alone for another 4 weeks, eventually reaching what is now Sitka, Alaska, on August 15, 1775. A heroic achievement for captain and crew.

Bodega y Quadra had achieved two important goals: He confirmed that the Russians had not made landed settlement, and his cartographer was able to draw the first reasonably accurate map of the rugged coastline.  With his mission accomplished, Bodega y Quadra led the Sonora back to San Blas, where  he and his few surviving crew members were carried off their schooner, their bodies racked by illness and weakened by hunger, and they were celebrated as heroes.

A second trip north was soon to come. In 1779, Bodega y Quadra was ordered to return to the region to strengthen Spanish claims to the territory and to continue mapping the coastline. In spite of his earlier success, he was placed as second-in-command, perhaps reflecting his lower social status as a “Criollo“, an officer born in the colonies. This second voyage was also recognized as a sound success, and his participation was once again celebrated.

More than a decade later, Bodega y Quadra returned to the region for a third time. In 1791, he was appointed as the Spanish commissioner to negotiate and administer  the implementation of the so-called Nootka Conventions at Nootka Sound (which

is very nearly attached to Vancouver Island in what is present day British Columbia), with the objective of solving the territorial conflicts between the Spanish Empire and the Kingdom of Great Britain.

The backstory is that the Spanish had seized two British commercial ships in 1789 in Nootka Sound, provoking a serious international incident known as the Nootka Crisis and bringing both countries to the brink of war.  Britain challenged Spain’s claims of ownership of of this territory and argued that Spain had had no right to seize the ships. Theirs was not an empty threat: Britain had built a strong navy and there was a risk they could have won the dispute by force.

at Nootka Sound in August 1792 in order to negotiate the conventions of the agreement. The two commanders swiftly established very friendly relations, in spite of George Vancouver’s notoriously bad temperament.  While living on Nootka Island, Bodega y Quadra strived to build strong relationships with the First Nations people who resided there, establishing a close association with Chief Maquinna of the Nuu-chah-nulth people.

In a sidebar to what was considered to be a successful and colaborative negotiation, Captain George Vancouver and Bodega y Quadra decided to name a large island next to  Nootka Island after themselves, and so – for some time – what is today Vancouver Island was known as “The Island of Quadra and Vancouver”, but this name was eventually shortened to just “Vancouver Island”, testament to the eventual consolidation of British power in the region.

Nevertheless, Bodega y Quadra’s legacy persists on Vancouver Island. There is a Quadra Avenue in British Columbia’s capital Victoria, and a Quadra Park on the waterfront.  Further north on Vancouver Island you can also visit the Royal Canadian Sea Cadet Summer Training Centre known as the HMCS Quadra, and off the east coast of Vancouver Island, you will find Quadra Island, named after the mariner 1903.

Juan Francisco de la Bodega y Quadra y Mollinedo’s legacy has also been recognized in Peru in recent years. His childhood home still stands, and in 2012 it became  the Museo de Sitio Bodega y Quadra (Jr. Ancash 213, Cercado de Lima), a site museum which not only features a fascinating collection of post-colonial archeological           remains, but which hosts one room dedicated to the story   of the boy from Lima who eventually explored the Pacific Northwest, and who helped shape the history of British/Spanish colonial relations.

The District of Comas

Why start a Business in Peru